5 Famous Places in Estonia That Have Inspired the World

5 Famous Places in Estonia That Have Inspired the World

From global car brands and famous DJs to Christopher Nolan himself – some famous places in Estonia have inspired people around the world. Thanks to the mixture of Soviet industrial buildings not far from modern skyscrapers and endless untouched nature – Estonia is perfect for movie makers and visitors alike. Although seen by millions, the actual location of filming is never revealed to the viewer. Therefore, we decided to bring the secrets out to the daylight. We are not going to tell you about Tallinn Old Town or beautiful palace gardens that most tourists visit. This blog is about 5 unique and strange places that have reached a wide global audience. These are the must-see sights in Tallinn for the thrill-seekees that are away from the typical tourist path. Following a good tradition of blog writing, the cherry on the cake is left to the end. No skipping!

One of the most famous places in Tallinn that has reached millions is Linnahall. It is a concert hall in central city which was built for the 1980 Soviet Olympic Games. As the building is easy to access and offers plenty of bizarre Soviet architecture, it has inspired several producers. Linnahall has its three-minutes of fame thanks to Norwegian DJ, Alan Walker’s music video for his song Faded. With smashing 2.6 billion views on YouTube, this music video has introduced places that are famous in Estonia but most of the world has no idea about. If you want to step into the Faded music video yourself, visit Linnahall during the Secrets of Soviet Tour in Tallinn. You can also explore the submerged houses shown in the last part of the video on the half-day tour to Rummu Submerged Quarry and Coastal Cliffs which we talk more about in later in the blog.

Nearby Linnahall is another famous place where white letters ‘U.N’ are painted on the brick stack of now modern conference center. These letters date back to the time when 1979 Soviet science fiction movie Stalker by Andrei Tarkovsky was filmed in Tallinn. If you are a real movie geek and would like to follow the footsteps of Tarkovsky, visit Rotermann quarter on this Tallinn Top Attractions Tour to find the Stalker passage. Or, get outside of Tallinn to visit an abandoned hydroelectric power station which also appears in Stalker on this 5-hour Harju County and Jägala Waterfall Tour!

The lead singer of Rammstein, Till Lindemann, has found inspiration for two of his music videos in Rummu quarry. Whether this is a positive or negative thing is up to you to decide. The formular is simple: take a quarry where hard labor from prisoners was used during the Soviet time and you get enough content for the Rammstein guy. Luckily, the quarry has inspired several other musicians as well. For example, British singer Marina shot some beautiful snowy scenes for her song Handmade Heaven in the same place. Most of the times, however, it is the industrial and grim feel preserved from the Soviets that the artist seek.

We certainly think that the Rummu quarry can be a great place to visit, locals even use it as a secret beach during summer months.  If you want to explore the sight in the Lindemann’s music video together with Paldiski city and the Northern Estonian coastal cliffs, book the half-day Tour to Rummu Submerged Quarry!

PLEASE NOTE: as you can probably see already, this music video can be disturbing!

Tallinn has only a few medium-sized skyscrapers which are not all that spectacular. However, many producers come here for shooting their clips for the skyline. Closing the traffic for few minutes in a capital with only half a million citizens is much cheaper and less stressful than let’s say in New York. We don’t suppose that you would want to visit Estonia after seeing the ad for Renault autonomous car or for Volkswagen’s electric car. However, if you do visit Tallinn, then after taking the Old Town Walking Tour, don’t forget to get out of the tourist bubble and explore the rest of the city as well!

Estonia has a lot of beautiful nature that is easy to reach! You can find modern skylines, industrial buildings and beautiful nature in close proximity. With an hour you can get from the busy city centre to quiet woods and vast wetlands. To experience this, book the combo tour of Old Town and Bog Walk and experience two opposite settings within few hours. Or, if you don’t have enough money or time at the moment to escape to Estonia, then seems like all you need is a pair of Sony headphones. Apparently you can go on a canoe trip in Southern Estonia with a single click.

Life in Tallinn was turned upside down in summer 2019. Why? Well, you can already guess. The director of Inception, The Dark Night Trilogy and Interstellar – Christopher Nolan was in Tallinn to shoot his next (probably big) movie Tenet. Suddenly, the locals in Tallinn tried to fit few castings into their already busy lives to get a role as an extra. Several streets were closed and rumors were going around about Robert Pattinson cycling around the Old Town. One of the major highways leading out from Tallinn which many use for their daily commute was also closed. The film crew tried to keep warm relations with the locals by giving out free tea and pies for those who tried to navigate around places closed for filming. We obviously cannot wait to see the movie and the local tour guides are already thinking about Tenet-themed guided tours.

Although we know the rumors about where the movie was filmed, we do not know which scenes will make it to the end product. However, we definitely know that if you want to drive down the highway shown in the Tenet trailer, all you have to do is book a Day Trip to Lahemaa National Park and you will be driving out of Tallinn the same way that John David Washington and Robert Pattinson did. Visit before it becomes mainstream!

Here you go! Even if you have never hear about Estonia, you may have seen it without knowing. There are even more fantastic places that Hollywood movie directors and car ad makers have not discovered yet! You can be ahead of the game and visit the best Estonia has to offer on tours with a local guide and who knows, maybe you will see those places in a next Hollywood sensation few years later. 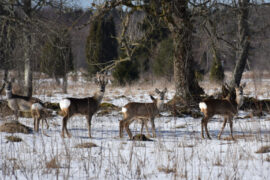